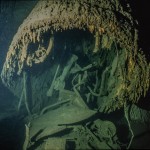 A team of Finnish divers has located and explored the wreck of the Russian World War I armoured cruiser Pallada in the Gulf of Finland. Pallada was torpedoed by a German submarine in October 1914 and became the first warship lost by the Russians during the First World War.

The armoured cruiser Pallada (Паллада) was built for the Imperial Russian Navy in 1906 and assigned to the Baltic Fleet. The ship played a crucial role in capture of code books from the German light cruiser Magdeburg in August 1914. The code books where passed on to the British, giving them an advantage over the Germans in the naval battles of Dogger and Jutland.

Less than two months later the Germans were able to revenge. On the October 11th 1914 Pallada was torpedoed by the German submarine U-26 and she blew up with the loss of all hands, becoming the first Russian warship sunk during the war.

The wreck lies upside down in deep water, with the giant propellers as the topmost structures. The ship’s hull was torn into two pieces by the enormous explosion that took place at the time of the sinking, as the torpedo hit the ammunition storage.

The wreck of Pallada is a grave of more than 600 Russian sailors.

About The Team Badewanne

We are a group of divers that have been documenting shipwrecks in the Gulf of Finland for more than 15 years. We are a multi talented team with a broad skill set on underwater video, still photography, drawing & painting, 3D modeling, underwater engineering and marine sciences. Additional information: www.badewanne.fi